The unique thing about Read Play Love theatre is...the love!    We create a role for every child participating.  From an empowering audition experience to a triumphant closing night, our primary goal is simple: to build confidence and nurture creative expression of each child.

​RPL is the ideal place for kids to try theatre for the first time, as well as more experienced performers to stretch their wings & grow!

* Free Workshops - We kick things off with Free workshops on Sept 20, 22 and 23, giving kids a truly fun and empowering experience!  In each of the three workshops, kids will learn the audition song for the show, and choreograph it together. Each workshop is for combined ages (4-17) and space is limited--  Click here to reserve your spot in a Free Workshop.

* First Meetings & Auditions - On Sept 27, 29, 30, each cast will have their first meeting on their ongoing rehearsal day.  During this meeting, we will play some theatre games to start to bond as a cast, and everyone will audition for roles.  The kids will be encouraged to audition with the song taught at the workshop the previous week (which will be available online) but this is not required.  More information about auditions will be given prior to the first meeting.

​Even our auditions are designed to be positive experiences, and everyone participating has role created for them.  Each child will be asked if they want to have lines that they say by themselves, and if they want to sing a solo.  Their preferences, along with your family’s conflicts and the overall needs of the show, will all factor in the casting, but you can be certain -- at Read Play Love, every child gets a chance to shine.  There are also options for non-singing, non-speaking parts as well, in addition to backstage crew workers.

* Rehearsals - once the show is cast, the script and songs are written and will be distributed to the cast, so that rehearsal can begin the first week of October.  Each show will rehearse on their specific rehearsal day until Thanksgiving.  (Farmer Boy, Prairie Girl on Tuesdays; Some Pig! on Thursdays; Little Christmas in Concord on Fridays).  Some notes regarding rehearsal:
* Final Rehearsals - After Thanksgiving,  there will be two full dress rehearsals involving all three casts.  The schedule the final two weeks:
* Performances are December 8, 9, 10, and 11 at 4pm.  We'll be performing at our cozy outdoor theatre at the Read Play Love Exploratory... which will be completely decked out for an Old-Fashioned Christmas! (We did this last year for "A Christmas Carol" and it worked beautifully!) 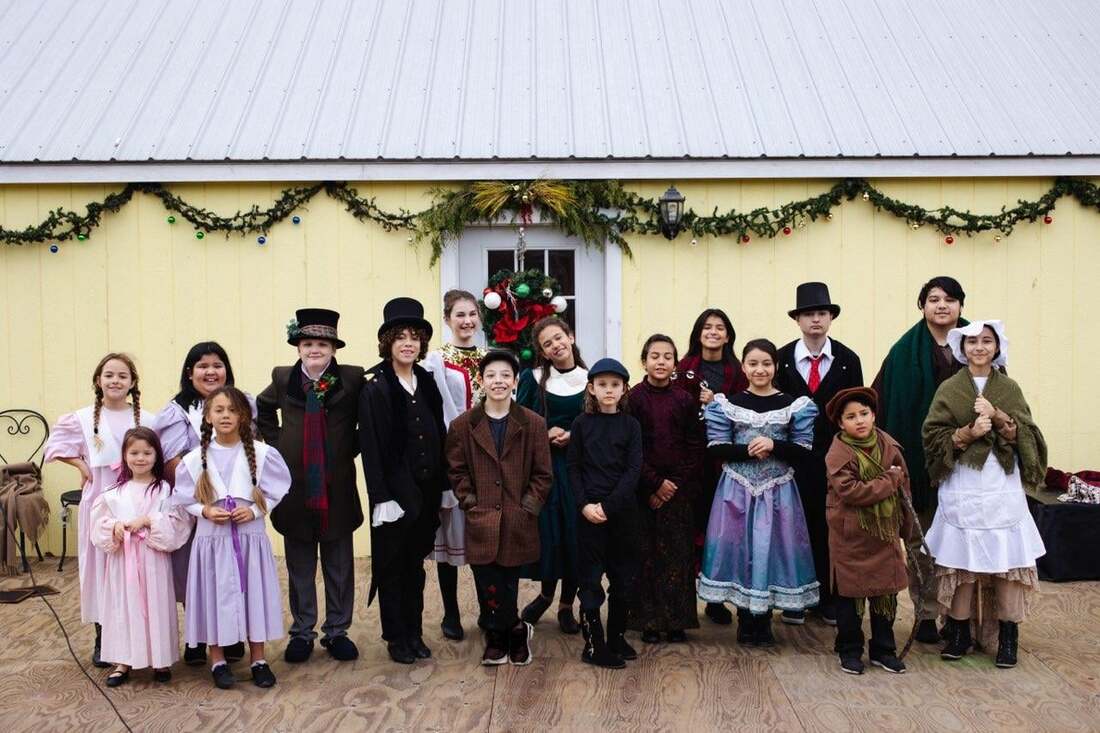 The cast of "A Christmas Carol", 2021.
2. Show Details
Each of the shows is a standalone one-act musical, and all three will be performed together as a set, with intermissions in between each.  All three are inspired by classic works of literature, all in the public domain, which means they are allowed to be used freely for new adaptations such as ours.   Another thing they all have in common is their shared message about the importance of family and friends - which is a perfect message to deliver at Christmas time!

​Here are some details about each of the shows:

"Farmer Boy, Prairie Girl"
Rehearses Tuesdays 4:00-6:00
This musical is inspired by Little House on the Prairie books, depicting the major events in the lives of Almanzo Wilder, Laura Ingalls and their families as they experience life on the prairie.  Scenes and songs depict hard times such as hard physical labor on the prairie, difficult winters when coal was scarce, and young Mary losing her eyesight...as well as happy times such days at the county fair, nights of singing and dancing, and the joyous wedding of Laura and Almanzo. Through both hard times and happy times - the importance of the family unit and the value of a strong work ethic are the prominent themes.

Of the three shows in our series, this is the that one spans the largest breadth of time, following the Wilder and Ingalls families over decades. Therefore, casting might include "young" and "older" versions of characters being portrayed by different actors.

Roles may include the following (note this is not a final list, as RPL shows are always written to accommodate the specific cast!)
"Some Pig!"
Rehearses Thursdays 4:00-6:00
This musical is inspired by the classic, Charlotte’s Web – which tells the story of an extraordinary spider who saved a pig’s life, and all their other friends on the farm.  Scenes and songs will touch on all the major story points, including Fern saving Wilbur, Wilbur's transfer to Zuckerman's Farm and the new relationships he formed there, Charlotte's plan to save his life, their experience at the Fair and the trouble caused by Templeton the rat, saying goodbye to Charlotte, and welcome her new children back on the farm.

Of the three musicals, this one has the the most comic flair, with all kinds of theatrical antics taking place in the barn!  Even though this story is probably the most well-known of the three, it is possible that some new subplots for the various farm animals may be created for our cast!

Roles may include the following (note this is not a final list, as RPL shows are always written to accommodate the specific cast!)
"Little Christmas in Concord"
Rehearses Fridays 4:00-6:00
This musical is based on part of the book Little Women -- the classic about the four sisters in the March family and their adventures growing up in Concord Massachusetts in the mid 1800s.  Our version will draw out and expand upon the portion of the book that takes place during Christmastime, which will be ideal for the "Musical Classics" trilogy!  The original book has a wonderful scene where the March family learns the meaning of love and service, and our version will expand upon that story to include not only the March family, but new subplots for other families celebrating Christmas in Concord. Of the three shows, this one is likely to have more dialogue and opportunity for acting with scene partners, though there still will be plenty of opportunity for music.

Roles may include the following (note this is not a final list, as RPL shows are always written to accommodate the specific cast!)
3. About Read Play Love Musicals?
* Our primary focus is simple: building confidence & nurturing the creative self-discovery of each one of our kids!

* Even our auditions are designed  to be 100% empowering, inspiring experiences where the kids feel GREAT, with each child having a 1:1 opportunity with director Marney Makridakis (parents can watch or not, it's up to the child.)

* We mentor kids where they are and help them feel great, stretching them a bit further than they expect...all while being part of a high quality production!

* We are known for developing new musicals as part of our series of "New Musicals for a New Generation!"   Our musicals feature rich storytelling with affirming, positive messages for our kids. One of our new musicals, The Whimsical World of Sherlock Holmes, will make its New York debut in New York City in August 2021, performing Off-Broadway in the Broadway Bound Theatre Festival.

* RPL is the ideal place for kids to try theatre for the first time, as well as  more experienced performers to stretch their wings & grow!
4. Production Fees & Parent Involvement

* Read Play Love Members: For current RPL Members in a six-month membership commitment to the RPL Community, there is a one-time production fee of $60 for 1 child, $90 for two children, with a family-friendly cap of $120 for 3 or more children. Click here for info about RPL Membership.

*Production Fees are the same, regardless of the number of shows/days in which you're participating.

* Costume costs are the responsibility of parents, but  parents work together to decide and make everything as easy and most importantly, cost-effective as possible, often using shared, donated, or secondhand materials to keep costs minimum and much less expensive than other theatre production opportunities.

* Printed Script:  Each actor is responsible for the printing and binding of their script at their own cost.  For music, we will send you links of rehearsal recordings for songs so that you can rehearse at home.

* A Concessions Donation of $10 per production is requested of all families.

* Tickets are reserved on a donation basis.  Ticket revenue from performances of our original musicals has historically been a lifeblood for Read Play Love. In the past, we sold tickets for $10-$12 each for adults, and kids’ tickets for about half of that.  For this production, we are taking reservations on a donation basis.  This way, those who are able to donate more can do so, and if any family would find regular ticket prices cost prohibitive, they can donate what they can.

* Fundraisers, such as t-shirts, photobooks, and production DVDs, are optional and up to the discretion of each family.

* Volunteer Commitment - Parents are expected to volunteer for one of the parent crews in the production. We work with each family to find the best fit for your schedule, availability and interests.  Parent Crews include things like are props, costumes, set, backstage, lobby decor, fundraising, or helping with general  Read Play Love projects.
4. Sign Up Here!
To sign up for one or more of the shows in the "Musical Classics" production, simply pay the production fee below, and indicate the show(s) you are selecting.  If you need a little more time before paying the fee, simply send Marney and email to go ahead and let her know which show(s) you're signing up for, to confirm your enrollment (Final due date for Production Fees is Sept 30.)