This page includes information about the setting, story, and characters to be cast in ALIVE!

Optional: Want to audition with a song from the show?  Scroll down to the bottom for materials to learn a few song selections.

The Story of Alive!:

Watch the video for a quick look at the story:
When spunky Merrilee starts to work at ThriftCycle during the holiday season, little do her co-workers know that their little thrift store is about to turn upside down like a snow globe!  With a bit of magic, a very special collection of Vintage Toys come to life and share their memories and longings.

The toys meet Father Time, who tells them that they can become truly real if they travel through a magic snow globe portal and complete a challenge: visit their former owners to help awaken their spirits and bring them “back to life” before the end of winter.  Their owners – now adults – desperately need their help; as Father Time says, “some people are living, but they are not alive.”

Raggedy Ann visits her former owner Matilda – a woman so driven to be a supermom that she’s missing the joys of everyday life.  Captain Kablammo visits his former owner Ivan, the CEO of Irving Investments, who is consumed with financial profits rather than the value that lies in his family.  A Dollhouse Family visits their former owner Walt, a frustrated writer who has lost faith in his creative dreams. A Music Box Ballerina must help her former owner, a depressed professional dancer whose recent injury means she can no longer dance professionally.  Velvetina the stuffed rabbit visits her former owner Phoebe, whose heart is hardened as she is unable to forgive her best friend since childhood.  And a Jack in the Box visits her former owner Elektra, whose desire for control is putting all of the toys – and possibly the entire world – at grave risk! 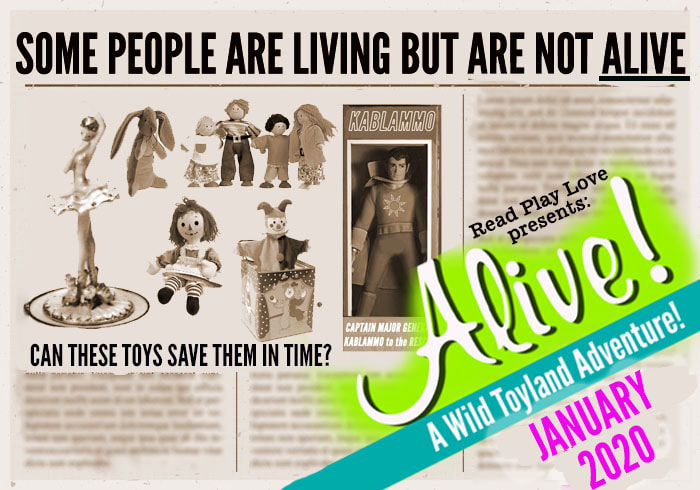 THE CHARACTERS
As this is an original musical, some characters and components may change based on casting and  choices necessary for the show’s development.

NOTE that almost all characters, the gender could be changed from male or female, or vice-versa.

THE VINTAGE TOYS:
Captain Major General Kablammo: a bold and fearless action figure
Raggedy Ann, a vintage doll, full of optimism and hope
Velvetina, a stuffed rabbit: tough and spunky, always wished she could be a tiger instead
Music Box Dancer, graceful but broken; self-conscious about not being as fancy as new dolls
Jack in the Box, a sassy comedian, brave on the outside but nervous on the inside
Mother Mae, the mother of the dollhouse family, natural leader, ahead of her time as a career woman in the “old days” of dollhouses

FROM THE MAGICAL WORLD:
Father Time: A mysterious figure who brings a shelf of thrift store toys to life, and challenges them to rescue their former owners
Merrilee, a magical elf working undercover as a thrift store clerk
The Snow Globe Fairies – fairies in Father Time’s Snow Globe

REAL WORLD CHARACTERS:
Dahlia, Matilda's young daughter, who loves Christmas songs
Mr. Bond, Mr. Irving’s assistant, who keeps his positive nature in spite of his stern & serious boss
Paige, Walt’s wife, who tries to help him get his creative spark back
Amy, Lacey’s friend and roommate, encouraging but frustrated at Lacey's stubborness
Faith, Phoebe’s best friend from childhood
Malory, assistant to a shady inventor, working undercover as a thrift store clerk
Millie, a thrift store clerk who is quiet and keeps to herself but keeps an observing eye on things
Investors and Financiers, a mix of characters who work both for and against Elektra

Want to Audition with a Song from the Show?

This is completely optional, but we offer it as a possibility for children who may be motivated to learn something new.

If your child is interested in one of the 12 Principle characters (one of the Former Owners or one of the Vintage Toys) it is especially helpful to learn the songs and readings suggested, but this is by no means required. Children are welcome to sing absolutely any song during their audition.

During the audition, children can sing with or without the backtrack.  Once cast, we transpose the songs (make the musical key higher or lower) to best showcase each singer's voice.


1. "Awake and Alive" - the show's opening number, sung by the full company
(it is not necessary to learn the whole song; a portion is fine)

Elektra, a shady inventor with a villainous scheme
Matilda, an overscheduled mother who is spread too thin with holiday activities
Ivan Irving, a stern businessman, values life only in terms of money
Walt, a cynical writer disillusioned by his work
Lacey, a professional dancer, recently injured and shutting out dance in her life
Phoebe, a graduate student in music who had a falling out with her childhood best friend

3. The Toys' Narratives - Excerpts from spoken-word poems that are performed by each of the Toys in which they expressively tell the story of what happens when they meet their former owner.

Note: children auditioning with one of these poems will also need to sing a song -- either from the show (I recommend "Awake and Alive" which is listed above) or any other song.  A recording of each spoken poem is given below, which can help with memorization, if desired.

Captain Major General Kablammo: a bold and fearless action figure
Raggedy Ann, a vintage doll, full of optimism and hope
Velvetina, a stuffed rabbit: tough and spunky, always wished she could be a tiger instead
Music Box Dancer, graceful but broken; self-conscious about not being as fancy as new dolls
Jack in the Box, a sassy comedian, brave on the outside but nervous on the inside
Mother Mae, the mother of the dollhouse family, natural leader, ahead of her time as a career woman in the “old days” of dollhouses